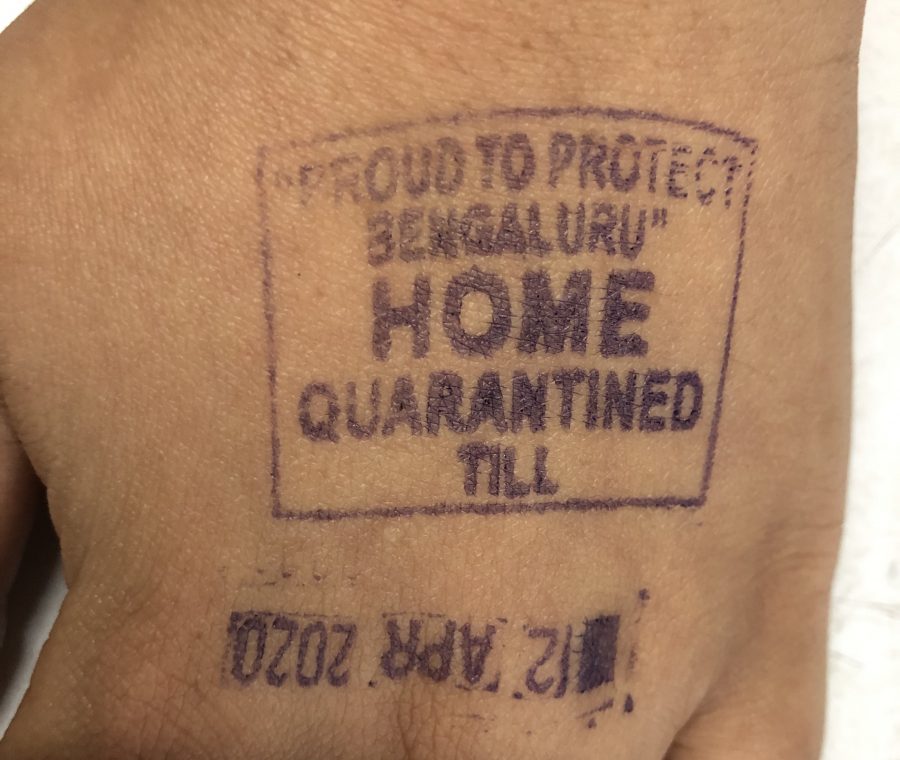 Let me start out by saying that I’m not naïve. I’m painfully aware of how dangerous our circumstances are right now, and especially when dealing with a disease as contagious and as deadly as COVID-19, it’s imperative that strict measures be put into place by countries’ leaders.

However, as necessary as they are, some measures get to the point where they infringe on people’s privacy and leave citizens feeling frustrated, scared, and unnerved. That’s what I experienced when I returned to India.

I left Boston after finding out that classes were moving online and that students living in university-owned residence halls had to vacate. I thought that the few days of frantically trying to figure out how online classes worked, urgently packing up my entire dorm room, and enduring a stressful journey back home would be the worst of it.

I flew from Boston to Bangalore, India and made a transit stop in Dubai. On my second flight, a flight attendant handed me two identical health forms to fill out. Among other things, I had to list my home address in Bangalore as well as my phone number. When I landed, each of the forms went to a health officer – one who took my temperature, and then one who asked about my travel history and symptoms.

Once I got home, I made a plan to self-isolate. Knowing the amount of people I had been exposed to while travelling, it would’ve been incredibly risky if I didn’t. I chose not to hug my parents or my grandmother. I made a beeline for my bedroom, and I wasn’t going to leave for 14 days.

First came the distant check-ins from the government.

From my first day of quarantine, I received automated phone calls every day, from the Department of Health of Karnataka. The automatic voice message asked me to record my symptoms by pressing certain buttons – an effort to monitor my health during quarantine. At first, it was one, maybe two calls a day. After a while, it rose to ten calls a day, sometimes within a span of two hours.

Screenshot of calls from the government to the author in one day. Photo: Pavithra Rajesh

Then came a physical check in.

The first time I left my room during the 14-day period was not by choice. On March 22, I got a call from a police officer who wanted to verify my name and address because he was coming to visit me. I left my room to find a police officer and a health official in my living room. They had one of my health forms, which is how they were able to contact me. They gave me a stamp on my hand that stated that I was home quarantined until April 2. If I stepped out of the house, I would be liable for arrest.

Then my home address went public.

On March 24, my dad received a WhatsApp forwarded message that included an excel sheet created by the government. The sheet was a database that documented every single person who had been home quarantined after travelling back to Bangalore.

The spreadsheet included my home address, the date I arrived in Bangalore, the date till which I would be quarantined and where I had traveled from – all on a document that was available to the public. A family friend of ours had told my dad that he had heard an official going around our neighboring areas, screaming that there were two people (my brother landed a few days after me, also from Boston) home quarantined in our apartment.

Screenshot of the excel sheet created by the government and made public to track people coming back from abroad, which was forwarded to the author’s father through WhatsApp. The addresses and other personal information were blurred by The Global Observer for privacy. Photo: Pavithra Rajesh.

Then a government measure with the intent on tightening up surveillance.

On April 2, my last day of quarantine, I received a text that asked me to download an app called Quarantine Watch. Through this app, home quarantined citizens were required to send a picture of themselves every hour, except from 9p.m. to 7a.m., as the location stamp of the picture would allow officials to ensure that the person hadn’t left their house.

Luckily, I received a follow-up text saying that it did not apply to people who had already finished their period of home quarantine – I was kept from that, at least.

Screenshots of text messages from the government regarding a Quarantine Watch App meant for people in quarantine to upload photos of themselves every hour to be checked by the government. Photo: Pavithra Rajesh

It’s safe to say that a lot happened during my period of home quarantine, and it seems like these measures will only continue. Although they are necessary for public health, when put in the context of increased surveillance and a rise of authoritarian regimes around the world during this pandemic, it may raise alarms.

I understand where officials are coming from, especially with reports that many quarantined citizens have been caught leaving their homes, potentially infecting other people by going to crowded areas. In a country of 1.3 billion people, measures as such are sometimes necessary.

However, this experience was just proof of the strange, nerve wracking time we’re living in, where ordinary citizens can be tracked and watched like criminals. While governments must do everything they can to stop the spread of the virus, we should also think hard about what we might be losing in exchange.

Will these measures continue in some context well after the pandemic? Will we always be scared of our movements being tracked? How far can governments go with the claim of “public safety”? I don’t think anyone can know these answers for sure, but it’s worth keeping in mind. My point of view about these measures: