[Podcast] Two tales of moving out during a pandemic 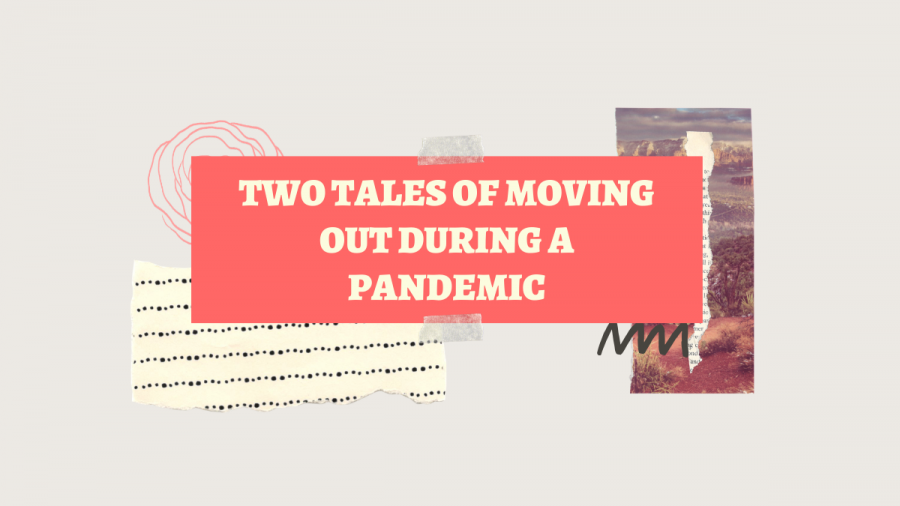 Sitting in a near-empty room with two large suitcases, I contemplated my decision to move off-campus. Boston University was closed for the semester because of the coronavirus restrictions. Will I get along with my temporary suitemates? Should I just book a ticket and fly back to China? What if Boston locks down the city? Uncertainties were spinning inside my head like the whirling blades of the helicopter outside my window: I can’t get away from these negative thoughts; I can just hope they disappear on their own.

While my brain was still detached from the real world, the packing and rumbling noise from the room next to mine pulled me back. Through the thin wall, I overheard my two Chinese friends in the next room complaining about flight cancellations. They sounded irritated, they sounded helpless.

A sudden gust came through the window and blew one of my landscape photographs off the wall down to the carpet. I picked up the photo, the tape on the back didn’t stick well after almost a year and a half. I tore it down and fed my photo to the backpack filled with life essentials. I tried hard going through the same process for all photos since my backpack seems reluctant to include them as it was filled up. Eventually, I had no choice but to leave most of them hanging on the wall, hoping the staff would like them.

I took one last look at the shoebox-sized room: it’s lit by a poorly-positioned fluorescent light located only one meter above the mattress. The room looked plain and unattractive, but it had been my sweet harbor. It was the time to say goodbye, a temporary parting or an actual farewell. I didn’t know which one it was; I still don’t.

Somehow, I managed to fit all my possessions into one yellow, rolling bathtub-like cart. I laid my two suitcases flat in the cart as a base and stacked everything else on top: my bedsheets, my jackets, my protein powder, etc. My blue yoga mat and red bedsheet made the yellow cart look conspicuous, making me stand out among the other poor souls moving out.

Only the warm-up part of this journey ended when the elevator brought me and my cart to the ground floor. The excruciating drill presented itself as a one-mile arduous trudge down Commonwealth Avenue with a cart weighing over 100 pounds. I raised my head, gave a smile to the sky and moved on.

March in Boston never felt like spring: the trees on the side of the road still looked drab from last winter. I was wearing a jacket and gloves, though the sunlight felt more like a spotlight. The once-bustling Commonwealth Avenue also lost its own spring because of the coronavirus pandemic: students and employees were no longer running between cars to catch buses and the Green Line.

They all had begun studying or working from home a couple of days ago. As I tried to control the cart on the street, I saw other students were either loading their items to their parents’ cars or standing behind the curbside waiting for someone. Some seemed calm under their parents’ company, most of them looked anxious. All of them had help from someone — I knew I wasn’t the only one moving out, but I didn’t know I was the only one moving out by myself. Lucky me.

Balancing the cart became the biggest obstacle on my way to finishing the trek: the uneven weight and heavy load inside the cart made it nearly impossible to go straight. The ear-splitting sound of the wheels was as loud as cars on the highway. The once unnoticeable cracks on the road grabbed my cart’s wheels like an octopus’ sucker, which forced me to stop and pull out the wheel. Sometimes it happened in the middle of an intersection and sometimes it happened on the Green Line’s railway.

Every time I reached an uphill or downhill incline it became laborious to control. I was drenched in sweat in less than fifteen minutes. I had to take off my jacket and hoodie. My California-style tank-top outfit was gaining tons of attention. I was indeed carrying the spotlight aura like a busker: every pedestrian fixed their puzzled eyes on me as well as my gorgeous, contrasty cart as I zigzagged toward my destination, hoping not to drift away from the sidewalk and smash any parked cars near the curb.

An hour after my departure, I was panting in front of the apartment building and backed in through the front door with my back. At the front desk, a security guard in his fifties stared at me and yelled as I was about to take the elevator. I didn’t think he was talking to me until he yelled again after getting up from the chair and having his beer belly standing between the elevator and my cart. He told me that no move-in would be allowed during the period of coronavirus and pushed my cart aside. I frowned.

As I was about to argue with him, he pointed to a notice on the outside of the front door, which indicated that currently moving any personal belongings into this building was prohibited. He said he was just doing his job and I should call the office for any questions.

But, it was Saturday and no one answered the phone. I froze, then pulled up my phone, scrolling through my contact list and calling every one of my friends who were still in Boston. Meanwhile, the security guard’s eyes were monitoring me as if I was going to start a breakout with the phone call.

The author (right) and his friend who graciously share his apartment temporarily. Photo: Delong (Andy) Ye

Suffering all the misfortunes, a minuscule fortunate arrived in time as the security guard was about to evict me by force – one of my graduate friends was willing to share his apartment with me for the time being. The distance between him and me was about one mile, but I couldn’t complain. I got a branch to perch on, at least for now. Yellow cart, tank-top boy, and another fun one-mile plod. Here we go again.

Undergraduate student Pavithra Rajesh had to quickly move out of her dormitory and travel back to Bangalore, India, her hometown. Here’s her story: