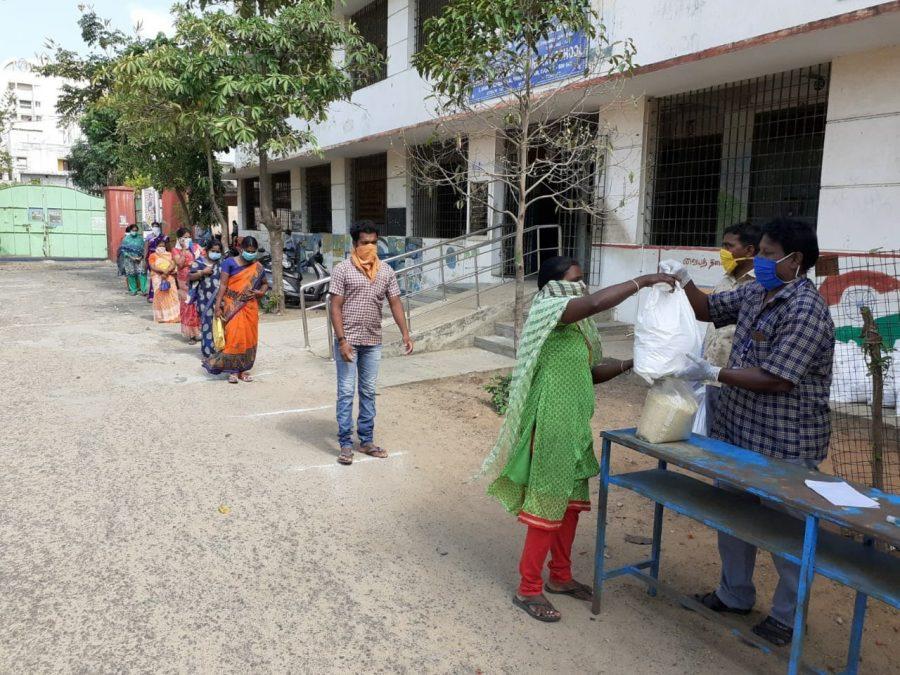 India’s immediate enforcement of a nationwide lockdown since March 24 has left vulnerable communities in the country scrambling to sustain their livelihoods. Among those are India’s “daily wagers” — house helpers and street vendors who have lost their already insecure jobs and are now becoming dependent on limited relief funds from the government, non-profit organizations, and strangers’ kindness. Most have little education and are poor, with few skills.

A daily wager’s unstable income is dictated by the number of work hours performed every day. They make a living by cleaning houses and cooking, or by selling fresh fruits and vegetables door-to-door. Some work as cleaners in malls, where the wages are better.

House helpers arrive at households early in the mornings, often before daybreak to sweep, mop, and draw “rangoli” — designs drawn using rice flour in the front of houses as a part of daily routine that reflects creativity as much as it signifies that all is well within the house. The house helpers are essential for the smooth running of most middle- and upper-class households. Very few of those households do not employ at least one house helper. 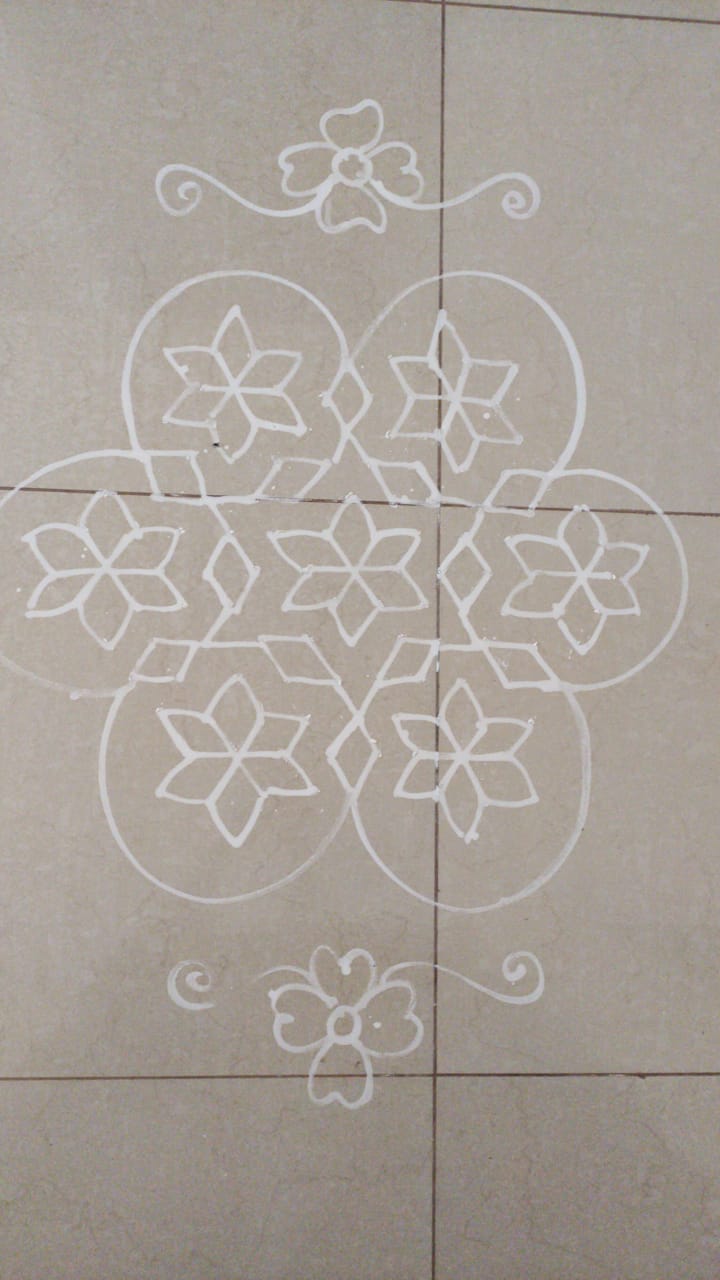 Unprepared for the pandemic

“It was all very sudden,”  Sunitha Marri recalled.

Marri, who was a staff member of the housekeeping department in a mall in Hyderabad until she was furloughed because of the pandemic, said the sudden lockdown announcement left no time for her to search for another job or make temporary arrangements.

Now, with the coronavirus pandemic, the mall has suspended its operations, causing its employees to lose jobs. While her employer was able to afford paying employees in April, the situation does not seem to be holding.

“My boss said there is no guarantee that we will be paid this month,” said Marri, referring to being paid in May.

House helpers, like other daily wagers in India make up 65 million of the country’s 1.3 billion population. They often descend from poor families who themselves worked as daily wage workers and performed the same tasks. Rarely do daily wage workers save up enough money to educate their children past 10th grade.

Before the lockdown, the house helpers made a few arrangements to make sure their family was fed at least one full meal a day. For example, Marri and families like hers send their children to public schools where tuition is low, if not free, and where lunches are taken care of by NGOs like Akshaya Patra Foundation’s midday meal programs.  On top of that, house helpers usually get to bring home leftovers in the houses they work in. However, due to COVID-19, schools have closed and house helpers were the first to lose their jobs, given their work schedule in multiple houses. Although Marri’s family receives 1,500 rupees ($19) every month from the government for the duration of lockdown, the amount, she said, is hardly sufficient to buy groceries for three people.

“It is not enough but what can we do?” she said.

House helpers, like other daily wagers in India make up 65 million of the country’s 1.3 billion population. They often descend from poor families who themselves worked as daily wage workers and performed the same tasks. Rarely do daily wage workers save up enough money to educate their children past the 10th grade.

Support from government and non-government programs

To Marri and other daily wage workers in India, help comes in the form of other government relief funds, such as the Public Distribution System, through which Marri and her family receive subsidized food grains every month.

“This month, we also received one kilogram of pigeon pea for free,” said Marri, referring to a kind of split pulse that when cooked is used as a side dish with rice and flatbread.

Another public program created in the wake of the coronavirus pandemic is the Prime Minister’s Citizen Assistance and Relief in Emergency Situations. While the details of how the funds will be distributed are yet to be revealed, donations from citizens have been pouring in from all over the country.

Left: A sack of rice and pigeon pea given to Marri’s family for May 2020. Right: The official government card used to obtain these food grains every month. Photo courtesy: Sunitha Marri

Non-governmental organizations (NGOs) too have launched  COVID-19 initiatives. Zomato Feeding India is one such organisation that distributes meal kits to underserved families, with each kit containing groceries to sustain a family for a week. In Mumbai which has the highest number of COVID-19 confirmed cases, Pindhara Foundation, a… with 20 members have started distributing face masks and sanitizers to marginalized communities while also making them aware of the situation.

“Members go door to door to explain how we have to maintain social distancing in order to stay safe and keep others safe,” said Furkan Shaikh, Pindhara Foundation’s Coordinator. “We are educating people in slums about how bad the pandemic is and asking them to take precautions seriously.” 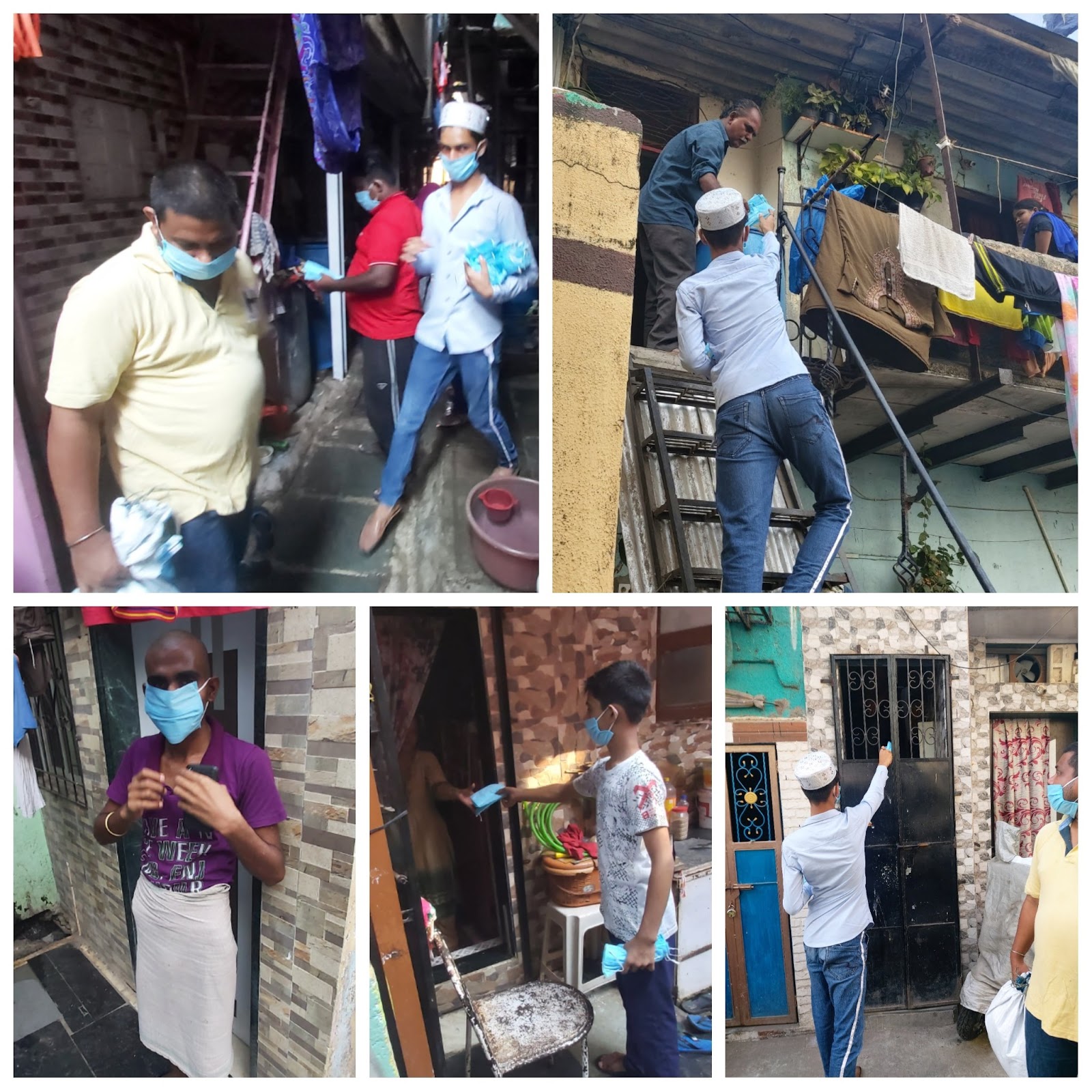 Other organizations have focused on increasing their donations to support daily workers, while individual businessmen and women are doing their bit to ensure their employees are safe. Children, too, have been given proper attention. Chennai based NGO, Yein Udaan, has been creating and supplying educational kits consisting of coloring and activity books to children in low-income communities.

“We anticipated that it would be a difficult situation to keep kids calm and occupied. Thus, this was a small step to make their lockdown bearable,” said Vedika Agarwal, who founded Yein Udaan and directed the efforts toward distributing ration kits to nearly 8000 low-income families. 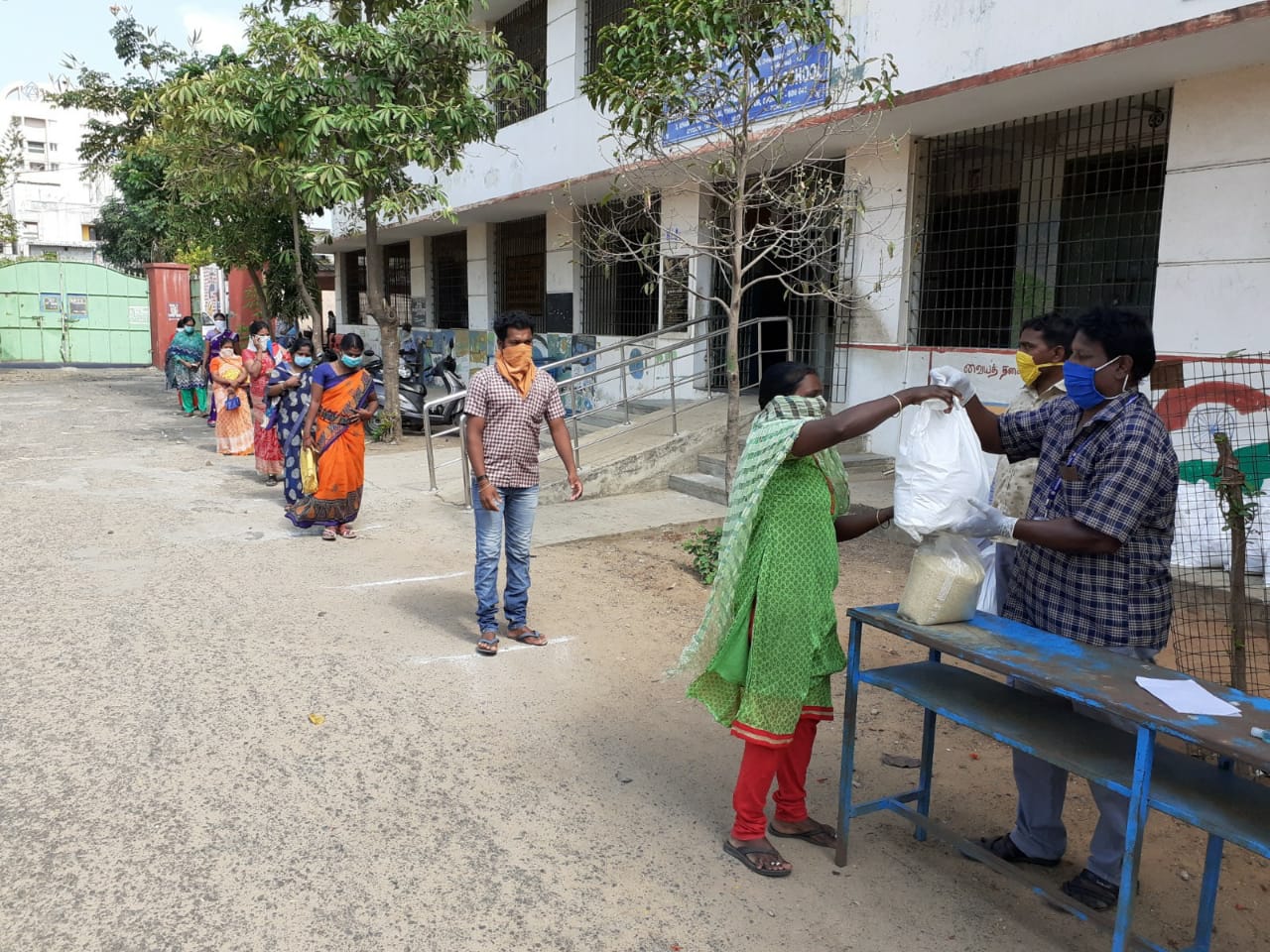 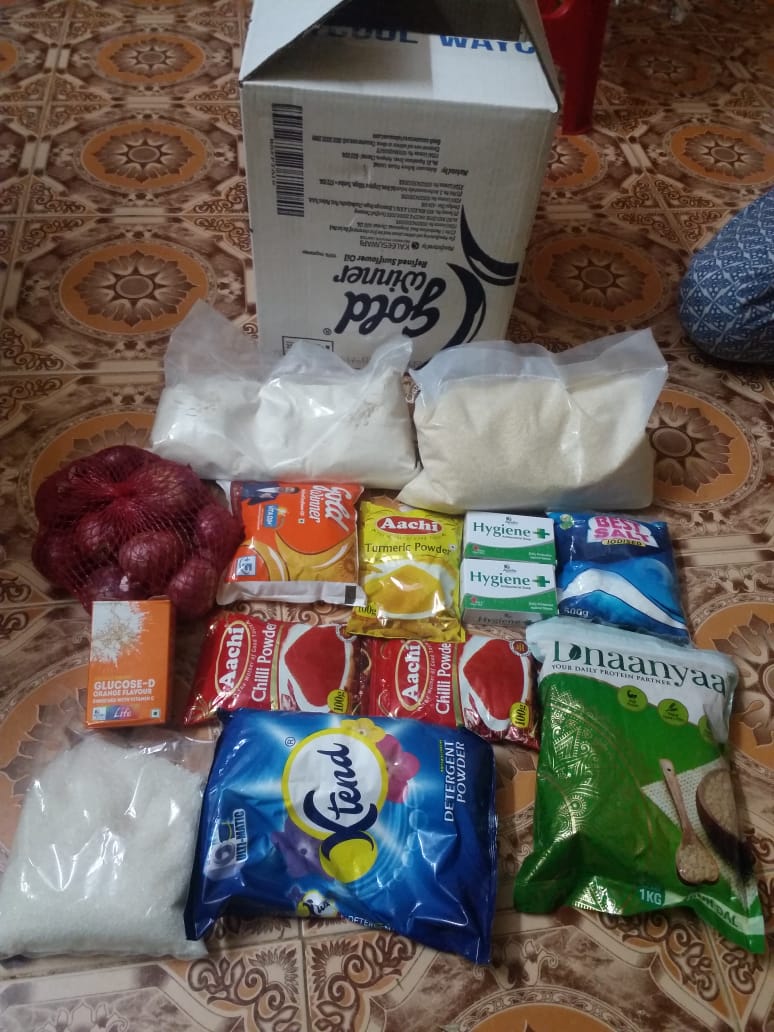 In an effort to encourage people who are well-off to empathize with the struggles of marginalized communities during the pandemic, Yein Udaan launched a game where players are presented with situations and challenges similar to those of daily wagers, and the actions taken in the game determine a fake bank balance and susceptibility to COVID-19. 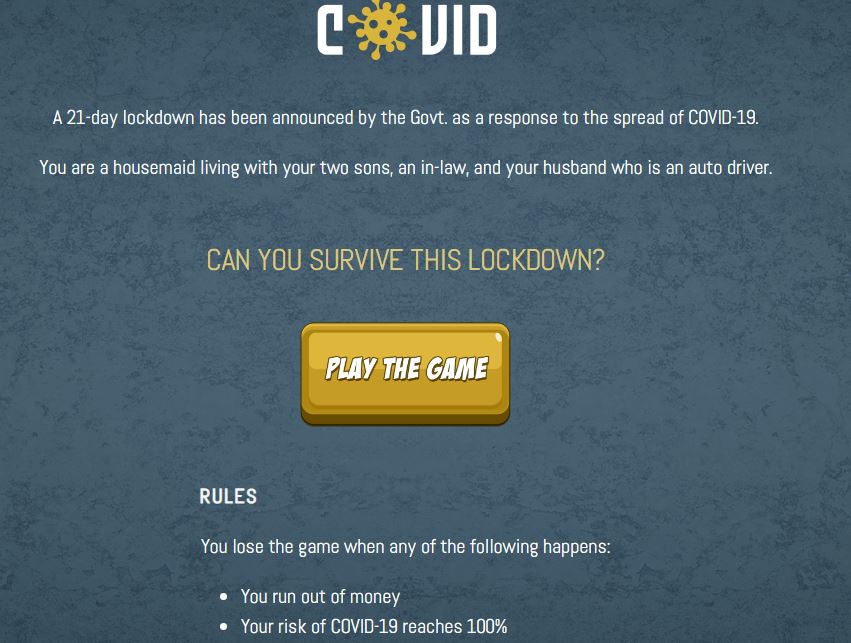 The homepage of the game launched by Yein Udaan. The game consists of 21 questions that reflect real life scenarios faced by daily wage workers during this pandemic. With each answer, the user’s bank balance and risk of COVID-19 is determined. Photo courtesy: Yein Udaan

India has 53,00 confirmed COVID-19 cases and 1,800 deaths as of the first week of May. Although the marginalized communities have been hit first and the hardest, NGOs have doubled their efforts to reach out to low-income families.

For a community that is used to stepping out every single day to offer their physical help in various households, this pandemic has come suddenly and unexpectedly, forcing them to adjust to a new reality.