The international student community cares about the election, too 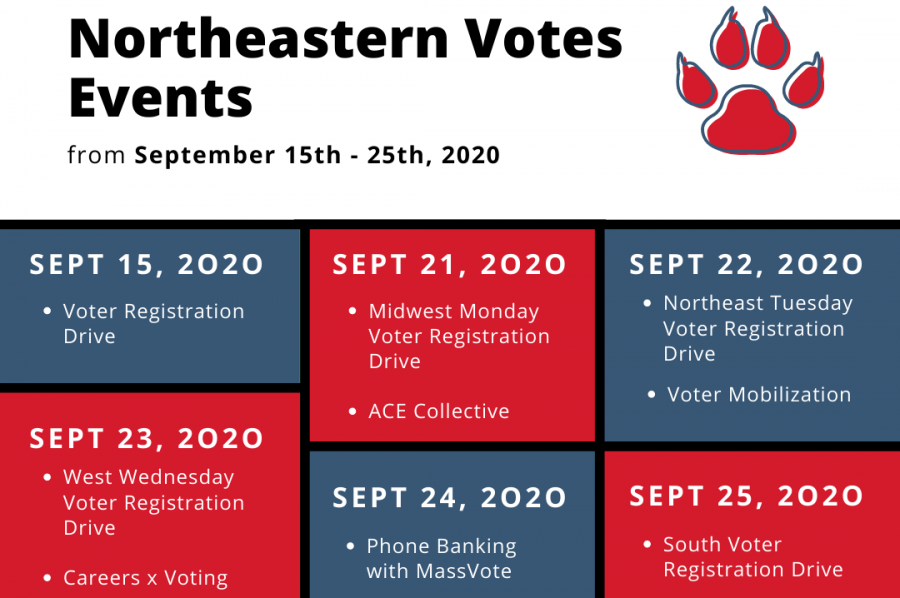 Rhea Tipnis is a second-year business administration major from India. She is the head of the marketing and outreach committee for the nonpartisan Northeastern Votes initiative, where she runs its social media accounts and organizes marketing meetings. She has been heavily engaged with this year’s election and feels that it’s important to bring the international student perspective to her American peers.

Tipnis has encountered many American students who don’t understand why international students care so much about the election and or have not considered the impact their vote may have on this group of people before.

“The reason we get so involved, even if we don’t get to vote, is because there are so many policies that affect international students, directly and indirectly,” Tipnis said. “Whatever policies that [Immigration and Customs Enforcement] or [The Department of Homeland Security] enact affects us, the COVID-19 travel regulations for travel affect us. We live in this country and are guided by its rules too.”

Tipnis came to the U.S. to attend Northeastern University because she felt that there would be many professional opportunities in the country. Her family has always emphasized the importance of education, and because the U.S. has a reputation for housing highly ranked universities, she imagined a bright future for herself.

Tipnis says she’ll personally be less confident about her future in this country if President Donald Trump were to be re-elected. She believes the president often undermines and excludes the international community, although it contributes greatly to the U.S. economy.

“Since international students can’t vote, I want to make sure that our American peers are casting their votes,” Tipnis said. “It’s up to them to ensure that everyone in the United States and those who want a future in here is considered too.”

Lydia Joubert is a French-Algerian fifth-year mechanical engineering major who grew up in the United Arab Emirates. From halfway across the world, she dreamed about a life in the U.S.

She recalls being hooked on American movies from a young age and by the time she was 4 years old she would tell her mother, “I’m going to New York City!” However, when Joubert moved to Boston in 2016, she experienced what she described as a “rude awakening.”

“With the current president, my time as an international student is dependent on somebody else’s temperament,” Joubert said. “My life is being made more difficult, more restrictive. If it’s going to be this difficult to live in this country, there are other countries that international students can go to. Don’t they realize that?”

Joubert expressed gratitude to Northeastern University, which she has always felt supported by. She believed that President Joseph Aoun understands the international student experience, because as someone who also first came to the U.S. to attend university, he lived through it too.

However, Richa Dhungana, a fourth-year finance and accounting major from Nepal, feels that there’s a problem with the perception of international students’ finances on campus. She feels international students are viewed as “money bags,” and is concerned that they are used as pawns to serve a financial purpose for Northeastern’s administration when the focus should be on providing opportunities for academic advancement to deserving, eager and hardworking young minds.

Dhungana described this presidential administration as particularly anxiety-inducing for international students, especially for those who are looking to apply for Optional Practical Training, or OPT, which allows international students to look for professional opportunities in the U.S. after graduation. She worries that OPT will soon become too difficult or even impossible to obtain.

“I don’t trust this administration, the current leaders in government,” said Dhungana. “I don’t want to put my hope in something that only wants to limit me.”

Dhungana has always felt supported by Northeastern, and felt  especially proud of the university in July when it combined efforts with Harvard University and Massachusetts Institute of Technology to file a lawsuit against the Trump administration over its decision to not allow international students enrolled in fully online programs to remain in the U.S. this fall. The decision was ultimately overturned.

Dhungana believes that if former Vice President Joe Biden is elected, the international student community could breathe a sigh of relief. However, if President Trump gets re-elected, she imagines a lot of international students would change their minds about coming here. Dhungana has heard some of her friends and family in Nepal say that they would not feel safe moving to “Trump’s America.”

Often, international people are ostracized in the U.S. by being accused of “stealing” American jobs. Vinayak Kapoor, a third-year political science and criminal justice major from India, believes this is an unfair assessment of what the international community does.

“We come to the United States, and we sacrifice a lot to do so but we pay our dues,” Kapoor said. “We come here looking for better education because we deserve it. We don’t steal American jobs, we earn them.”

Although he cannot vote, Kapoor is an active member of Northeastern Votes in the marketing and outreach committee along with Rhea Tipnis. He works registration drives and makes Instagram posts, trying to ensure that Northeastern students who are American citizens are valuing their right to vote. He believes that every vote counts, and that even if President Trump loses by only a thin margin, that thin margin would make all the difference.

Kapoor recalled a time when he was travelling in a Lyft car and he spoke to his driver about all the work he does to get people to vote. The driver admitted that he had never voted before, but at the end of the ride, he told Kapoor, “because of you and for you, I will vote in the coming election.” Kapoor was honored and motivated, because he saw firsthand how his passion for voting could make a difference.