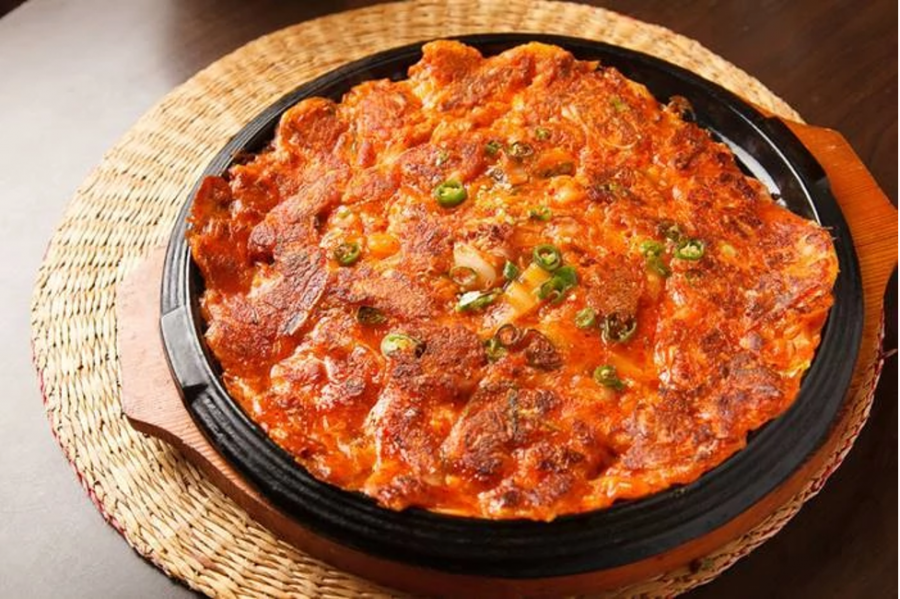 The kimchi pancake, also referred to as kimchi-jeon, is a traditional Korean folk dish and can be served as a snack, side dish, or appetizer.

This recipe is part of our new culinary series, The Global Kitchen, which features recipes from all over the world, provided by our own international student reporters.

Kimchi pancake, also referred to as kimchi-jeon, is a traditional Korean folk dish that anyone could make easily at home with no extra budget.  It is usually served as an appetizer, a snack or a side dish. It also goes well with alcoholic beverages such as makgeolli (Korean rice wine).  Kimchi is a staple in Korean cuisine. The dish is good for using up ripened kimchi.  This dish is super easy to make – even a 10-year-old kid can make it!

Thinly slice the kimchi, to about a ½ inch thick.  In a large bowl, combine the flour, kimchi liquid, ice water, liquid, and the egg. Mix it.  Add more liquid if the batter is too thick. It should flow easily from a spoon. Stir in the kimchi.  Heat about a tablespoon of oil in a non-stick pan over medium heat.  Ladle batter into the pan and spread evenly.  Cook until the edges are golden brown (about 3-4 minutes). Flip it over and repeat.

If you use Buchim Garu (Korean pancake powder), the process can be even simpler as you don’t need to put an egg. You can buy it at H-Mart (Korean market) or any other Asian market.