To Stay or to Go? 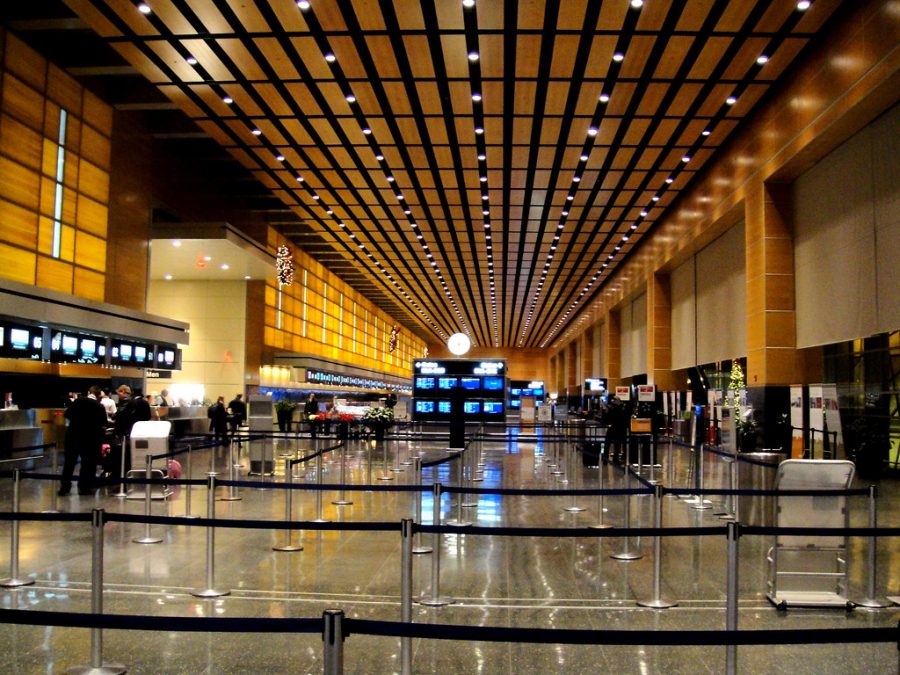 Boston Logan International Airport. For some international students, the risk of contracting coronavirus, as well international travel restrictions kept them in the U.S. this winter break.

The COVID-19 pandemic made international travel more difficult this year, complicating winter break plans for international students in the U.S. whose homes are often more than 10 hours of flight time away. These students not only had to consider the risk of catching the disease that has killed nearly 2 million people worldwide, but also the impact that various travel restrictions and visa complications would have on them.

Approximately 11,700 international students are enrolled at Northeastern, hailing from 140 different countries. During the pandemic, travel between the U.S. and these various countries has been hampered both by travel restrictions as well as limited seats available on international flights.

“I stayed in Boston because I was worried that if I left the U.S., I would not be able to come back,” said Arwa Almutabagani, a fourth year student from Saudi Arabia studying environmental engineering.

Almutabagani has not been home to Saudi Arabia since the previous winter break before the pandemic began in March 2020, and had originally hoped to finally visit over winter break. However, Saudi Arabia closed its land and sea borders and suspended commercial flights on Dec. 20, 2020, forcing Almutabagani to cancel her plans.

“Both my parents live in countries– Malaysia and Portugal– that are either in complete lockdown, or do no not allow visitors without a mandatory two-week quarantine in a hotel,” said Dhanani, pointing out that this would cut significantly into Northeastern’s month-long winter break.

Pointing to the risk of contracting the coronavirus while traveling, Dhanani said, “The flight home usually takes 24-36 hours including layovers, which means high exposure to COVID, so it’s not worth it.”

Dhanani said she has been in Boston since September 2019. She had planned to return to Malaysia in May 2020, but was forced to push that plan back when the pandemic hit. However, she still has her original ticket, and hopes to be able to use it this summer after graduating.

Unlike Almutabagani and Dhanani, fourth year political science and history major Anna Loshak spent her winter break abroad. Loshak, who is originally from Russia but grew up in Czech Republic, flew home to Prague in November 2020 after spending the first part of the fall semester in Boston.

“I was also able to fly to Moscow and see my grandparents for the first time in over a year,” said Loshak. “I had already recovered from COVID, so I didn’t pose as high of a risk to them, and we had to get tested in Prague, Moscow, and then again right before our departure.”

Loshak said this was her second time returning home since the pandemic began in March.

“I was lucky enough to be able to fly back to Prague in March, right before the travel ban was put in place,” she said. “Funny enough, I had applied for a Czech passport less than a year before the pandemic started. At the time it seemed a bit useless, but it turned out to be the only way I was able to get back home because Czech Republic banned entrance to all non-residents.”

In Loshak’s case, Northeastern’s remote learning program brought on by the pandemic meant planning her return home was a little easier this year.

“I felt like I could be a lot more flexible with traveling back and forth, especially since classes were online,” said Loshak. “Usually I wouldn’t fly back to Europe until the last day of the semester. This year I was back home before Thanksgiving.”

Other students, like England-native Emma Wyatt, made it home just in time.

“For winter break I did fly home, as all my family were there,” said Wyatt, a fourth year environmental science and international affairs major. “Although minutes after I landed the Prime Minister announced Tier 4 lockdown, so I wasn’t even able to see my grandma, cousins, or aunts and uncles.”

Although Wyatt was able to make it home for winter break, she had to significantly adjust her plans due to intensified travel restrictions in the U.K. brought on by rising cases and the new, highly contagious strain of coronavirus that was first discovered there.

“I stayed in Boston later than I usually do,” said Wyatt. “I also had to change my flight coming back, as on the scheduled day of my flight the U.S. announced that you needed a negative test to enter the country, which I couldn’t do in time.”

Indeed, students who did travel internationally for winter break will have to contend with U.S. and Boston specific COVID restrictions, which may change when the current President-elect Joe Biden is sworn in as president on Jan. 20, the day after Northeastern is scheduled to resume classes. Though Northeastern did not prevent students from traveling internationally during winter break, the university does require any students who have traveled outside of Boston during the break to quarantine upon their return until receiving their first negative test, and receive three negative tests before they can attend class in person.