How does gun violence differ in the U.S. and abroad? 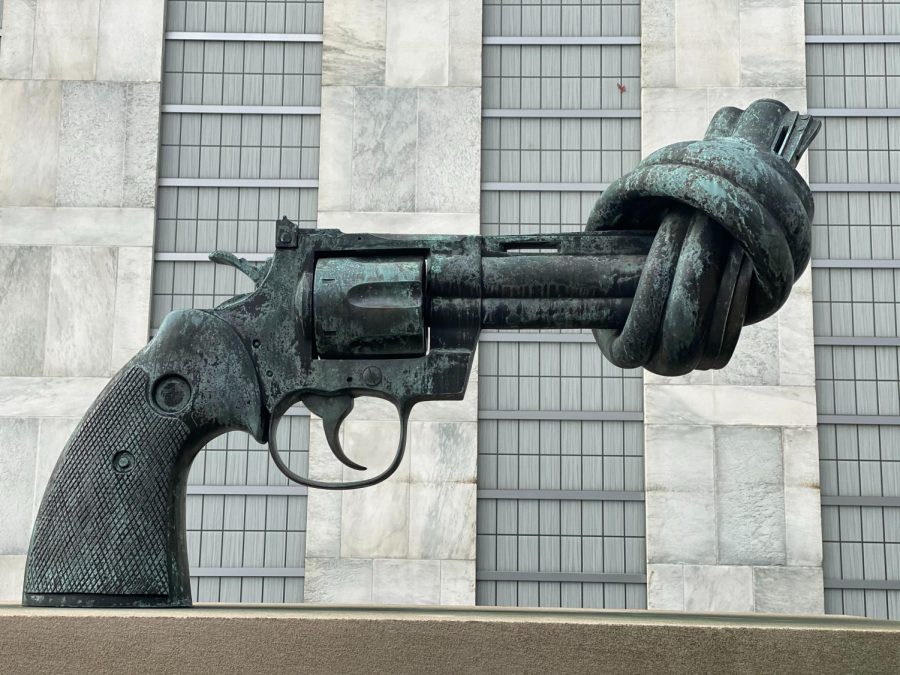 A spa in Atlanta. A grocery store in Boulder. A FedEx facility in Indianapolis. A rail yard in San Jose. These are only some of the locations of the 232 mass shootings that occurred in the United States so far this year. Gun violence and shootings have become common occurrences in the U.S.

Paula Soumaya Domit, a politics, philosophy and economics major at Northeastern from Mexico, did not realize the prevalence and potential danger until she witnessed it first hand. In 2020, Domit herself witnessed a shooting in Boston while walking with a friend on Boylston Street.

“Until then, I hadn’t really considered that this was also a real threat to me living in the U.S.,” she said. “You hear so much about the horror of mass shootings and how prevalent they are in the US, but it always seemed a bit distant to me. When the shooting began, I ran with my friend to hide and I remember thinking to myself, ‘Wow, I forgot that this can just happen here in the US. Out of nowhere, on a normal day in a normal place someone might just open fire.’”

It was this apparent randomness of shootings in the U.S. that Domit found to be the most shocking. In Mexico, she said, guns are typically only owned by criminals.

“In Mexico, we don’t have private gun ownership, so gun violence is pretty much intrinsically tied to a weapon that was illegally obtained for illegal activity. In a sense, you know what you’re in for,” she said. “In the US, with guns so widely available, you can’t identify the causes of shootings so easily… The gun violence in the US is bizarre in that it can occur with or without a reason and be carried out by anyone, anywhere, at any time due to the availability of weapons.”

Indeed, the accessibility of guns in the U.S. is the reason there are more incidents of gun violence here than in other comparable countries researchers have found.

According to data from the Small Arms Survey, a project of the Graduate Institute of International and Development Studies in Switzerland, the U.S. has almost 40% of the world’s civilian-owned guns, despite making up just around 4% of the world’s population. In recent years, deaths from mass shootings rose from 269 in 2014 to 417 in 2019 according to data from the Gun Violence Archive, an independent non-profit that collects data on gun violence incidents from over 7,500  law enforcement, media, government and commercial sources. Additionally, the U.S. has a much higher rate of homicides caused by guns compared to other high-income countries.

For example, Swanson said, imagine a group of young men come out of a pub and get into a fight. In a place like the United Kingdom, where civilian gun access is more limited, someone walks away with a black eye or a bloody nose. If the same situation occurs in the U.S., Swanson said, “It’s just statistically more likely that one of them has a hand gun and will use it and we’ll end up with a dead body, or more than one.”

There are a few reasons guns are so prevalent here, Swanson said.

“In the United States guns are deeply embedded in our culture. They’re wrapped up in the iconography of our social history, even more so in particular areas of the country like the western mountain states and the south,” he said.

The second reason Swanson offered is support from corporations and gun manufacturers.

“Guns are really corporately sustained and promoted. We have had very powerful gun manufacturers lobby. You have the NRA that has really promoted gun ownership, and for different reasons.”

Gun sales have been on the rise recently, with a significant spike in spring of last year. In the first six months of 2020, around 19 million firearms were sold in the U.S. Despite recent attempts by Democrats in Congress to pass legislation regulating gun sales, gun control measures have yet to gain bipartisan support, and on May 25 the Texas state legislature approved a bill that would allow residents to carry handguns openly, without training or a license. For students like Domit, this news is troubling.

“You often hear people say “guns don’t kill people, people do” in defense of the guns. I think that we can take this as a truth, but I don’t think this leads to the conclusion of ‘don’t regulate guns,’” she said. “People kill people, but guns facilitate this. While we figure out why there is such an alarming problem of gun violence, we need to stop facilitating it.”