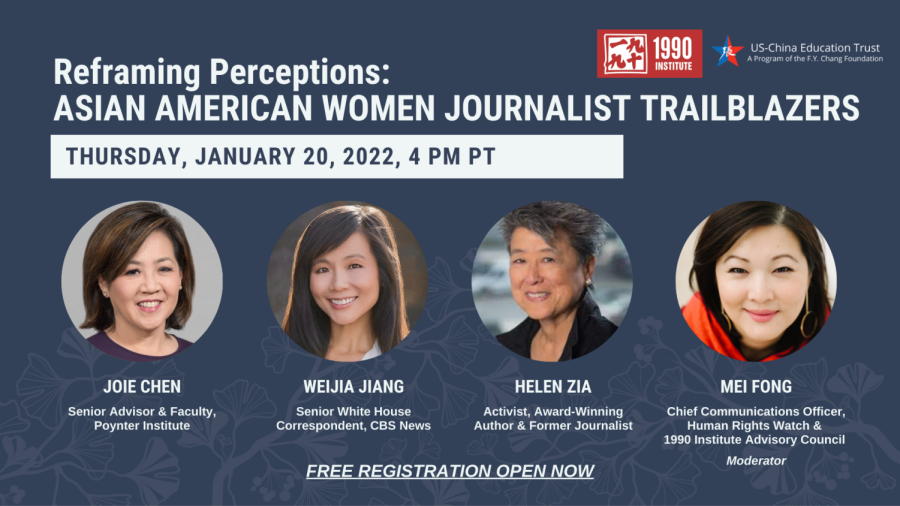 Three Asian-American journalists trailblazers shared their triumphs and frustrations at a webinar hosted by the 1990 Institute and US-China Education Trust (USCET).

Helen Zia, an activist, author, and former journalist, said at the event on Jan. 20 that there are places and jobs where Asian-Americans and Asian-American women have not been welcome. Zia said every time an Asian-American woman breaks through at one of those places, she can be considered a trailblazer.

“It is not enough just to be there, it is also what you do with it, because when you blaze a trail, it makes it possible for people behind you to follow,” said Zia.

Joie Chen, a senior advisor and member of faculty at the Poynter Institute for Media Studies, said trailblazing means make the change.

Weijia Jiang, a senior White House correspondent for CBS News, said, she does not consider herself as a trailblazer, when seeing Zia and Chen ahead of her. Jiang said it is wonderful to get notes from women who are 18, 19 and 20 years old, saying, “it is so great to see someone who looks like me on TV.”

Jiang said that it was naive to think of the U.S as being post-racial. People have to acknowledge that the path is far from smooth. As long as the trail still has bumps and challenges, they are all trailblazers, said Jiang.

“This is not just a blip, and this is not just us having a moment. This is us changing the narrative and retaking control of it and not letting go,” said Jiang.

Jiang said when she looks around the White House press corps, she cannot help but notice she is still very much in the minority.

“It is still a very white-driven industry, especially among that press crop. We are doing our part to change that,” said Jiang.

Mei Fong, the chief communications officer of Human Rights Watch & 1990 Advisory Council, said these three Asian American female journalists “own the tone” and share it with “Asian modesty.” Not only journalists but many other occupations need Asians to stand out, giving the next generation someone to look up to, she said.