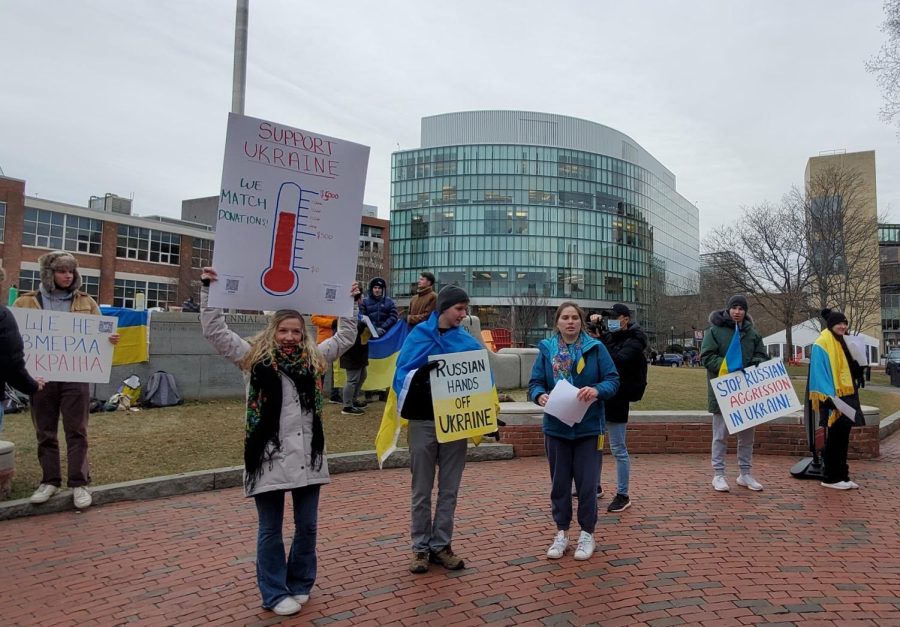 A handful of Ukrainian students living in Boston on Thursday protested the Russian invasion of Ukraine, by holding signs and asking for public support, on the Northeastern University campus.

Artem Dinh, a Tufts Biomedical Engineering junior student from Berdychiv, Ukraine,  joined the Northeastern Ukrainian club to support his community, as there are not many Ukrainian students at Tufts. Dinh said the situation was very frustrating.

Dinh said if the war escalates, a lot of people will be mobilized into the army, including his friends, and that is the last thing he wants to happen.

Dinh said he loves Russian culture, he watches Russian movies and many people go to Russian schools – but the invasion is awful.

“We are technically brothers, and of the same ethnicity. There is just no reason to fight,” said Dinh. He said he hopes people in the U.S. get the government to deal with Russia.

“We probably don’t know what’s going on behind the scenes and Russian people, unfortunately, I know it’s very risky for them to stand against the government,” said Dinh. “They can get arrested, they can get beaten up, they can get jailed. So I cannot ask them to fight their gov, but if there is anything you could do to solve it, that would be appreciated.”

Zachar Hankewycz, a Northeastern Computer Science junior, from Lviv, Western Ukraine, said Northeastern’s Ukrainian club is trying to raise awareness and gain support for Ukraine. Hankewycz said the situation is uncertain and very fluid and he does not know what is going to happen. He is very worried for his family and friends.

“There has always been Russian aggression, even in my life,” said Hankewycz. In 2004, there was the Orange Revolution in Ukraine. In 2013, there were protests in favor of European unity. And then came the Russian occupation of eastern Ukraine and Crimea.

“But this is a whole new level,” said Hankewycz. “It is just completely out in the open and it’s a full invasion. I think now more than ever, it’s important for people to be informed and know about this issue.”

Sofia Handzy, a sophomore Ukrainian-American from New Jersey, majoring in Mechanical Engineering, said when she talked to her family two days ago, they were scared and half of them were going to flee to Poland and half planned to fight. She found it very scary and worrying.

“I am just really hoping everything is going to be OK, and I just hope that people will support Ukraine and help donate so that we can stop Russian aggression like that again,” said Handzy.