Hear “The Ghost of Keelung” in live radio performance 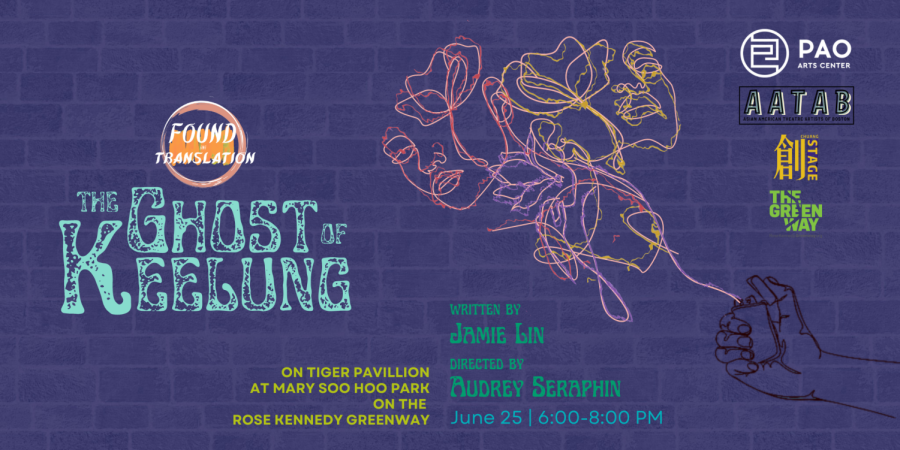 The radio play "Ghost of Keelung" will be performed live on Saturday, June 25.

“The Ghost of Keelung,” a new bilingual radio play, will be performed live on Saturday, June 25, at 6 p.m. at Mary Soo Hoo Park on the Rose Kennedy Greenway in Boston.

The show is a time-traversing adventure of “ancestral love, mistakes and revenge,” according to the Pao Arts Center’s website. The event is a collaboration between CHUANG Stage, Pao Arts Center, Asian American Theatre Artists of Boston and The Rose Kennedy Greenway Conservancy.

It was written by Jamie Lin and directed by Audrey Seraphin. Lin, a 29-year-old Taiwanese American theater artist based in Greater Boston, talked with Global Observer.

Lin’s original idea for  “The Ghost of Keelung” was to create a Halloween show. Then she thought maybe there was an opportunity to dig around the internet for a ghost story set in Taiwan. “Just like some kind of historical event in Taiwan that still kind of captures the historical feeling,” she said.

Lin also wanted to write a story for Asian actors specifically. “Because in my experience, just living in Greater Boston, I think it is very rare for me to be not the only Asian in the room. And thankfully, that experience has shifted in the past couple of years,” Lin said.

Before “The Ghost of Keelung,” Lin worked in another play where the cast was almost entirely Asian and she really enjoyed the experience. “I want to create this more, not just for myself, for other Asian theater artists in Boston,” she said.

This is a radio play with live “foley sound effects,” which is the art of performing sound effects to match movement, like footsteps.

“So we have two foley artists, who basically have all these different equipment and instruments, toys, random things,” said Sarah Shin, who is one of the co-producers of the show. “While the actors will be standing with their mics acting, the foley artists are also at their mics, making those sounds live.”

That means audiences will get the fun experience of watching the foley as much as the actors during the show. And if you like to envision the action, you can close your eyes and just listen.

The performance is in English, Mandarin and Hokkien, which is spoken in Taiwan. It is a natural lived experience for Lin that made her want to replicate in the script and sprinkle in some phrases. “I think any multilingual person has this experience of like, oh but when I’m with my people, or when we want to have a side conversation, we will switch to the language that we know that maybe the rest of the people in the room don’t,” she said.

This show is a part of a summer 2022 outdoor performance series named “Visions/Voices: Year of the Tiger Performance Series.”

The performances are meant to celebrate the cultural power that flows through Asian Americans and Pacific Islanders(AAPI) communities across the Asian diaspora. It is also a part of a community workshop series named “Found in Translation,” which aims to “amplify the power and complexities of being multilingual, immigrants, or identifying as AAPI in Greater Boston.”

“I think I’m just so excited this is happening in Chinatown. That’s really cool for me to be able to tell the story in this Asian space.” said Lin.

The show is free with a suggested donation of $10.  For registration and more information, visit https://www.paoartscenter.org/events/2022/found-in-translation-the-ghost-of-keelung or contact [email protected].