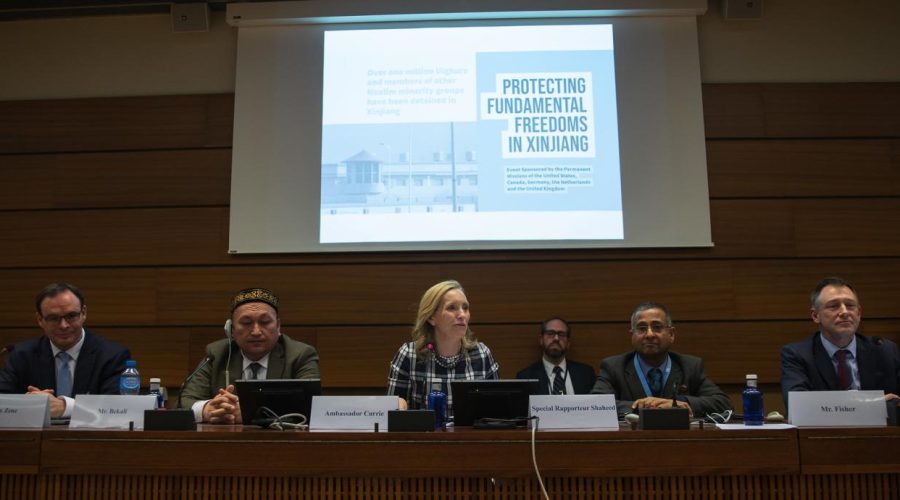 In 2019, the U.S. co-hosted an event with Canada, Germany, the Netherlands, and the U.K. at the U.N. / to raise awareness about human rights abuses in Xinjiang. Photo Courtesy: U.S. Mission Photo/Eric Bridiers

A weekly roundup of news around China

The United Nations released a long-awaited report on Wednesday that accuses China of committing “crimes against humanity” in its mass detention of Uyghur and other Muslim ethnic minorities. It concludes that “urgent attention” is required from the international community, while China needs to further clarify the details of its human rights violations. This 46-page assessment was released shortly before Michelle Bachelet, the U.N. high commissioner who visited China early this year, stepped down from her role.

Background: The Biden administration once referred to the discriminatory detention in Xinjiang as a “genocide.” The U.S. Congressional-Executive Commission on China (CECC) has also released a report, citing “the Chinese government’s systematic violations of human rights and failure to fulfill its obligations under international treaties pose a challenge to the rules-based international order.”

Xinjiang Rights Report Ratchets Up Standoff Between the U.S. and China

China has again locked down one of its major cities – Chengdu, the capital of Sichuan Province – because of the discovery of local Covid cases. It is the largest city-wide lockdown since the two-month lockdown in Shanghai back in April. About 21 million residents were confined to their homes and not allowed to leave without special permission. Mass testing was undertaken and 157 cases were reported cases last Wednesday and more than 700 cases since Aug. 25.

Meanwhile: Sichuan is also experiencing a record-setting drought and heat, causing broad disruption to the city that mainly relies on the dam to generate electricity. The local government has been forced to limit the energy use of local factories and residents, and is even imposing rolling blackouts. Video online showed that despite the bush fire, people still needed to go out and take the Covid tests. Anhui, Zhejiang, Jiangsu and other provinces have also introduced power restriction measures.

Chinese Communist Party congress, which meets every five years, is set to open in Beijing on Oct. 16. It is expected to officially secure Xi Jinping’s unprecedented third term as the president. It will cement him as the most powerful leader in the country’s history since Mao Zedong, the founder of the People’s Republic of China. However, domestic issues such as the tight Covid control, decelerating economy or the real estate crisis remain to be solved.

Background: Last year, the party released the third resolution in its history. It focused on “the major achievements and historical experience of the CCP’s 100 years of endeavors,” which appeared to consolidate Xi’s position and pave the way for his third term. Mao Zedong and Deng Xiaoping delivered the previous two in the 1990s.

Ending Term Limits for China’s Xi Is a Big Deal. Here’s Why

The computer hardware giants AMD and Nvidia were warned by the U.S. government not to sell their chips for AI-related applications to China due to the new restrictions. It is the latest effort to block China from receiving powerful semiconductors and, according to U.S. officials, “keep advanced technologies out of the wrong hands.” The ban was imposed amid the tensions over Taiwan, where most of the world’s most advanced chips are made.

Taiwan Is Caught in a Great Game Over Microchips

The U.S. technology giants like Apple and Google are seeking alternative countries to manufacture their devices and are slowly moving some jobs outside China. The shift is a response to the mounting concerns over China’s draconian Covid control, U.S-China tensions, increasing labor costs and slowing economic growth. Part of the next generation iPhone and Pixel phone will be assembled in India and Vietnam.

Background: Despite the leaving plan, it will be a hard mission for technology companies to get rid of “made in China” because the country is still the world-leading electronics manufacturer. More than half of Apple’s 200 suppliers have facilities in China, which contributed $14.6 billion to the company’s third-quarter earnings.

US Goes on the Offensive in Its China Tech War

Censorship, Surveillance and Profits: A Hard Bargain for Apple in China

Two U.S. warships sailed through the Taiwan Strait last Sunday for the first time since U.S. House Speaker Nancy Pelosi visited Taiwan. The U.S. officials said it was to demonstrate its commitment to maintaining a free and open Indo-Pacific, but was based on a very early plan. The Chinese military said its forces “remain on high alert,” and are ready to thwart any provocation.

Background: Since Pelosi’s two-day visit in Taiwan, China has launched a series of military exercises around the Taiwan Strait to demonstrate the consequence of what it considers threats to its sovereignty. Taiwan officials said 23 Chinese military sorties and eight Chinese ships were tracked around Taiwan last Sunday, seven of which crossed the centerline dividing the strait.

How China Could Choke Taiwan

The Taiwanese Army shot down a civilian drone from China last Thursday on Kinmen islands, which are close to mainland China. According to local media, Chinese drones have recently entered Kinmen several times, which prompted Taiwan President Tsai Ing-wen to ask its troops to take a strong response for safeguarding the airspace.

Meanwhile: The security office of Xiamen, a city across Taiwan, has suspended the use of civilian drones and other small aircraft from Sept. 3 to Sept. 12 to ensure the safe and successful holding of the local trade fair. Hot-air balloons, paper lanterns and large kites are also on the ban list.

Taiwan premier says drone shot down near China was ‘appropriate’

Taiwan Shoots Down Drone, Showing Risk of Escalation With China

As ruling CCP (CCP) leader Xi Jinping prepares to seek an unprecedented third term in office, three veteran party members have spoken out against the ongoing centralization of power and signs of a personality cult around the general secretary. https://t.co/iucmMMsRSf

I should also add that, while such things can’t be openly reported on in the Chinese media, nearly every local government official I know has experienced a pretty significant salary cut this year, despite pretty significant inflation. You can draw your own interpretations, but…

China’s heatwave/drought is not fully appreciated, esp re: macro and ag implications. Here’s a thread on the latter, taken from analysis by the brilliant @Even_Pay. Hope she doesn’t mind; everyone should follow her.

Chongqing is dealing with a lot: the wildfires are burning, the power cuts are leaving parts of the city in the dark, meanwhile the Covid tests are ongoing. (Image on Weibo, it says: mountain fire – power restrictions – nucleic acid) pic.twitter.com/rNxU62iu1A

good example of how sneaky China disinfo can be – I can verify for all the folks at home that not a single one of Guangzhou’s main streets has any propaganda about Xi Jinping’s virtues. in fact this picture is very clearly of the inside of a museum pic.twitter.com/VV3Pg9aD17

“A tight siege was formed around Taiwan for the first time, providing a powerful deterrent to proponents of Taiwanese independence [who’d have no way to flee], as in ‘closing the door and beating the dog,'” – National Defense Uni Major-General Professor Meng Xiangqing, on Tuesday pic.twitter.com/cis0gdilCK

Flashback to 2018: “The Chinese side hopes and believes…Michelle Bachelet…will lead the…OHCHR…in fulfilling its missions in an unbiased, objective and non-selective manner…The Chinese side always supports the UN High Commissioner.”
h/t @jamestareddyhttps://t.co/Cv3N5piPin

1/ Here’s a Saturday Essay @Joshchin and I wrote for the @WSJ about China’s surveillance state. The excerpt lifts from our new book, but it’s worth a read as this was some of the best access we’d been given by a city agency running a surveillance system. https://t.co/uhNKJTc2nk

This is quite a chart. People are now expected to live 2.1 years longer in China than in the US. Covid deaths have contributed to the majority of the 2019-2021 decline in life expectancy for Americans. H/t to @hancocktom @JDMayger pic.twitter.com/AbPzZQuUlB