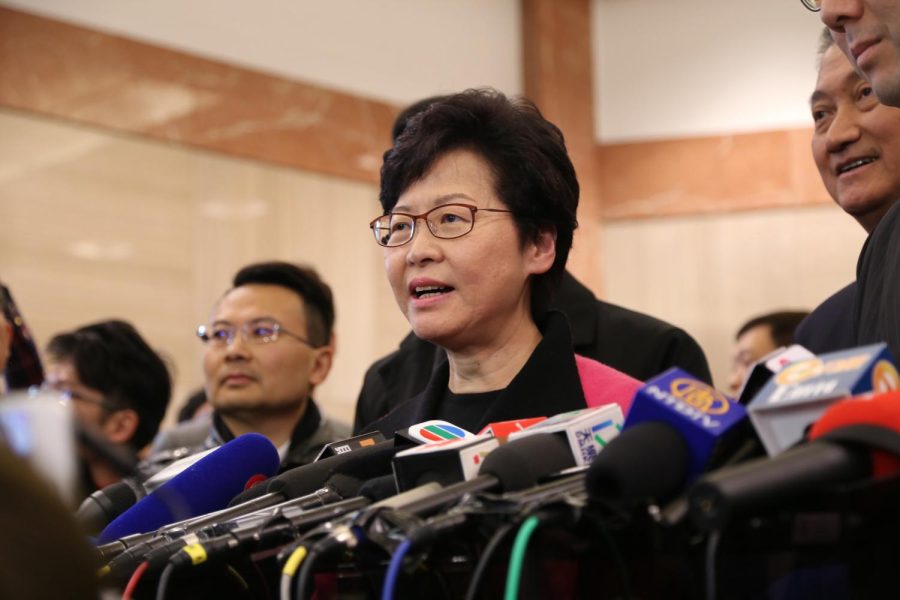 The deeply unpopular Chief Executive of Hong Kong, Carrie Lam, announced she would not seek a second term. Lam, who has served in government for 42 years, introduced the sweeping and draconian National Security Law in 2020, which sent pro-democracy activists to jail. She said she faced unprecedented challenges and scenarios during her term. Before the protests in 2019, Lam’s support rating was 43.3, but it has dropped to 19.6 by the end of 2019.

The U.S., Australia and Britain announced they would enhance the cooperation on developing new hypersonic weapons, under the trilateral AUKUS pact reached last year, as a counterbalance to China and Russia. The two countries have made notable progress in developing and fielding hypersonic weapons during the past few years. The work strengthened China’s influence in the Pacific and elsewhere, a concern to the Biden administration. U.S. officials admitted that the country would fall behind China in technology without a concerted effort.

Background: The Pentagon plans to improve airfields in Guam and Australia in order to counter potential attacks from China. The U.S. predicted earlier last December that China could have 1,000 or more nuclear warheads by 2030, and wanted to enter formal discussions with China about the issue. The U.S. Air Force secretary also warned that the two countries are engaged in an arms race for the most lethal hypersonic weapons.

China’s securities regulator revised longstanding secrecy laws that required the overseas-listed companies to complete an audit inspection within the country. This turning point happened after the Securities and Exchange Commission (SEC) said more than 10 Chinese companies might be delisted in 2024 because they declined to submit their recent audits to  U.S. regulators.. The mounting economic pressure  on Beijing is another factor. Now the question is: Will Washington embrace the change and have confidence that China will give full access  to audit reports.

Background: Last year, The SEC announced new rules concerning the Holding Foreign Companies Accountable Act, a set of laws that requires foreign companies to open their books to the U.S. government. If they failed to do so for three years in a row, foreign firms could be delisted from the U.S. stock exchange. The U.S. government has required the inspection of books of foreign listed companies since 2002, but mainland China and Hong Kong have not accepted the inspection, while every other jurisdiction did.

The bipartisan and bicameral Congressional-Executive Commission on China (CECC) released its 2021 annual report on China’s human rights conditions and rule of law development. The report stated that “the Chinese government’s systematic violations of human rights and failure to fulfill its obligations under international treaties pose a challenge to the rules-based international order.” It also deemed the crackdown against Uyghurs and other Muslim minorities in the Xinjiang region as genocide.

Background: The Office of the State Council of China released the Report on Human Rights Violations in the United States in February, stating that human rights in the U.S. “worsened” in 2021 in terms of pandemic control, elections, gun violence, racial tensions, immigration issues and sanctions against other countries.

ByteDance, TikTok’s parent company, allegedly scraped videos, along with usernames, profile pictures and account descriptions from Instagram, Snapchat and other equivalent applications to boost the growth of Flipagram, TikTok’s predecessor. Former employees revealed an engineering team in China scraped the sites after ByteDance acquired Flipagram in 2017. Hundreds of thousands of accounts were affected. It has been portrayed as “a symptom of a larger, industry-wide obsession with growth at any cost” by an ex-employee.

Background: The Biden administration has plans underway to revise federal rules to address potential security risks from the foreign-owned apps, especially the prevalent Chinese-owned platform TikTok. The new proposed rule would give the commerce secretary power to block those apps if they were suspected of carrying any security risks.

Taiwan’s spy monitors have investigated around 100 Chinese tech-companies suspected of illegally poaching semiconductor engineers and other tech talent since 2020. The probes were launched amid Beijing’s growing ambition to achieve self-reliance in advanced chips after the trade war with the Trump administration. The self-governing island owns 92% of global advanced semiconductor manufacturing capacity. Its official said what has been found so far was “the tip of the iceberg.”

Meanwhile: The co-chairs of the bipartisan Congressional Taiwan Caucus urged the Biden administration to invite Taiwan to participate in the new Indo-Pacific Economic Framework (IPEF) because “Taiwan is a major economy in the Indo-Pacific region.”

A new research published in the U.S. medical journal shows that doctors in China have performed organ transplants on executed prisoners without following the standard brain-death declaration procedures. China’s decades-history of permitting organ procurement from prisoners used to attract wide criticism. The paper examines 71 Chinese medical journals and suggests “that physicians in the People’s Republic of China have participated in executions by organ removal.”