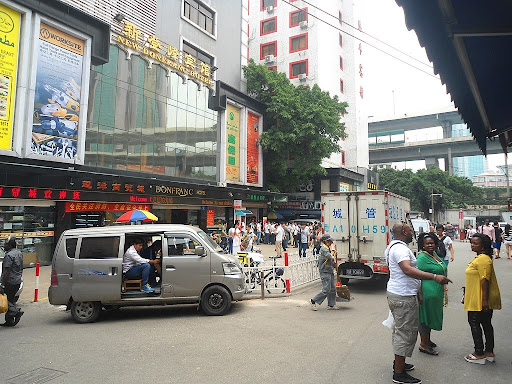 The heart of the African area, Yuexiu District in Guangzhou. Photo by Anna Frodesiak/Wikimedia Commons

China has been indulging in its “zero-COVID” mission since the outbreak of the coronavirus pandemic, leading towns and cities to abrupt lockdowns despite rare numbers of positive cases. Africans living in Guangzhou, a major city in southeastern China known for its great number of workers from Africa, have also been affected by the sweeping elimination of cases.

Three months after the pandemic began in 2020, Africans in the city were evicted from the rental apartments and rejected by many hotels, leading to homelessness and police brutality, according to the media reports. The news was widely shared on social media, triggering strong xenophobic and nationalistic sentiments.

Many users on Weibo, a Twitter-like social media platform popular in China, started accusing them of “illegally, improperly, engaging in criminal activities,” while expressing support for landlords and business owners who refused to serve Africans. The intense public response escalated the local issue to an international and diplomatic scale.

Several African countries expressed their concerns to China. The African Union and several of its members sent messages to their Chinese ambassador, condemning such incidents. Critics put China, the world’s second-largest economy, into an uneasy position, as the country has a long history of portraying itself as a good friend, even a brother, of African countries.

The African population in Guangzhou is primarily composed of small commodities merchants. According to the statistics released by the city’s Municipal Public Security Bureau, as of Feb. 25, 2017, there were 10,344 legal residents of Africans in the city. Until April 25, 2017, legal residents accounted for approximately 17% of Guangzhou’s foreign population. The official data did not reveal the number of illegal Africans.

Many of these Africans are fluent in Chinese Mandarin or Cantonese, two major languages spoken in Guangzhou. Some were also married to natives. However, they were still identified as foreigners, who became the subject of discrimination during the pandemic. Natives usually referred to the area where they mostly live as the “chocolate area.”

“In general, Guangzhou locals mostly held negative views toward the Black community, mainly Africans, living in Guangzhou,” said Belle Han, a student from Guangzhou studying at Columbia University. “Because the far-reaching stereotype is spread over generations in Guangzhou, they are portrayed as undocumented groups, filthy person, or dangerous criminals.”

In 2016, a TV commercial for laundry detergent featured a Black man drew allegations of discrimination. It shows the man, with stains on his shirt, is trying to flirt with a Chinese woman in a laundry room. The woman then puts a detergent packet into the man’s mouth and pushes him into the washing machine. Eventually, a Chinese man dressed in clean comes out.

Many people criticized the advertisement as inappropriate, implying that Chinese women are attractive to Black men, but the latter would not have the same attraction unless they are of different ethnicity and race, one considered “cleaner.”

On March 25, 2020, China’s health officials announced 67 new COVID-19 cases, which were all found in people who had overseas travel history. Around a week earlier, China reported zero cases for the first time. Many locations such as shopping malls and schools had resumed their operation.

Until March 28, mainland China suspended the entry of foreigners with valid Chinese visas and residence permits. Since then, major cities such as Beijing, Guangzhou and Shenzhen began to impose a 14-day mandatory quarantine for people who enter the country from overseas. According to the Wall Street Journal, the border restriction is still valid and will be extended for at least one year.

In Guangzhou, a “virus screening” project targeting Africans was launched in early April after several Nigerians tested positive for COVID-19 after arriving in the city. Although the local Africans did not have any travel history, they were still subjected to mandatory testing. Videos of Africans clashing with Guangzhou police, being refused entry by restaurants and supermarkets, being forcibly quarantined at home or staying on the streets started circulating on the internet.

On April 2, an African man attacked a nurse after refusing to comply with the quarantine regulation. People became angry and commented on social media to declare Guangzhou was the city for the Chinese, but not Africans. Such comments gained numerous likes on platforms such as Weibo and WeChat.

Sanyuanli, an area in Guangzhou, also turned into a hot topic because a WeChat article circulated online claimed that the cases from Africa had been locally transmitted in this area and affected a large number of residents.

Harris Liu, a business student studying in Australia, described this article as a very incendiary one, full of misinformation and leading words. “It triggered the long-existing misunderstanding rooted in Guangzhou people’s minds, and raised people’s nationalist emotion.”

The local Publicity Department said the article was “all rumors,” but it did bring a negative impact on the African community. Eric Olander, the founder of The China Africa Project website, described it as “a gnawing sense of betrayal still lingers,” since “China presents itself as a ‘brother’ to Africa.”

According to the Wall Street Journal, the ambassadors of some African countries in China said in a joint statement that “the singling out of Africans for compulsory testing and quarantine, in our view, has no scientific or logical basis and amounts to racism towards Africans in China.”

In July 1979, a Chinese student beat and poured ink on a Malian student in Shanghai because he thought the color of the foreign student was “too light.” It immediately triggered a fight, injuring 50 international students and 24 Chinese students. To express their disappointment, more than 100 African students gathered and marched in Tiananmen Square to call for a halt to sending African students to China because of the “serious anti-African tendencies.”

Gordon Mathews, professor of anthropology at the Chinese University of Hong Kong, writes in his book “The World in Guangzhou: Africans and Other Foreigners in South China’s Global Marketplace,” that “the developing world entrepreneurs of Guangzhou, especially the Africans who make up their largest number, play an essential role in making this trade possible.” He also indicates that most Africans in Guangzhou are “making a living” instead of “making a life.”