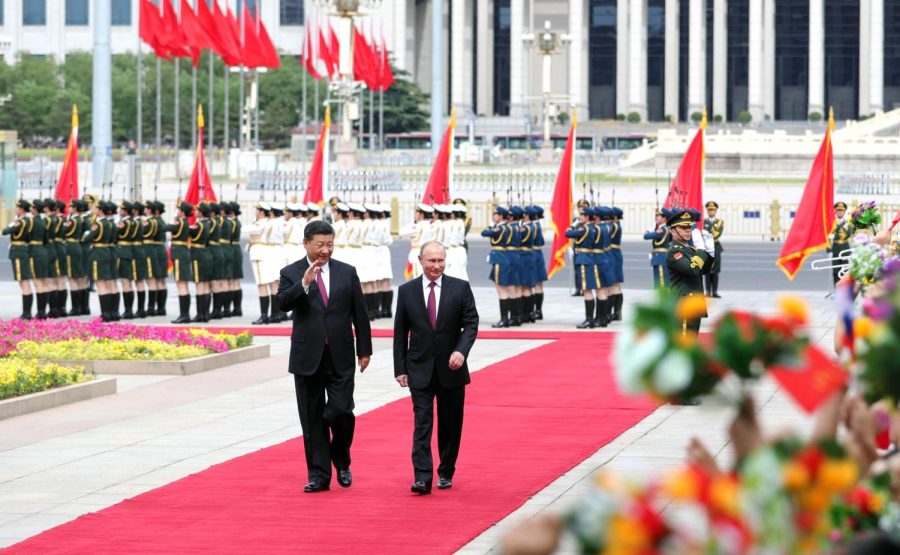 The President of Russia arrived in China on a state visit. Photo Courtesy: Kremlin.ru/Wikimedia Commons

As Russia wreaked a “full-scale invasion” of Ukraine, Chinese Foreign Ministry spokesperson asserted that the U.S. is “the culprit of current tensions surrounding Ukraine.” It is evident that China is a powerful ally of Moscow, given their new coal and wheat deals came to agreement days before the gunfire and blast sparked, and China is avoiding any criticism of the Kremlin. It abstained from voting on a U.N. Security Council resolution denouncing invasion, but called for calm after President Putin put nuclear deterrent forces on “high alert.”

The invasion also resonates with people in Taiwan, the self-governed island that Beijing claimed would eventually be united with China, because Putin could be a predecessor if Russia takes over Ukraine successfully. On the Olympics opening day, the leaders of China and Russia declared a “no limits” partnership to back each other over Ukraine and Taiwan disputes. Taiwan’s officials said that the island would join the international community in imposing sanctions on Russia.

China Initiative, a program launched under the Trump-era to combat China’s research and intellectual property stealing, was modified after a three-month evaluation by the Justice Department’s national security division. These changes come after several groups including civil rights supporters and universities indicated that the program prompted suspicion of Asian academics and encouraged the anti-Asian sentiment. A broader strategy targeting espionage, cyberattacks and other threats posed by a range of countries would replace the program.

Background: Federal prosecutors last month dropped charges against Gang Chen, a Chinese-born American professor of mechanical engineering at M.I.T. He was arrested in early 2021 under the China Initiative.

New studies concluded that the origin of the COVID-19 virus was a seafood market in Wuhan, China, further undermining the theory that the coronavirus leaked from a lab in Wuhan. The studies analyzed the early cases as well as animals sold at the market and discovered that most cases likely originated from some of the animals that were sold there. However, these outcomes were not convincing to some scientists who demand direct evidence that animals had themselves been infected with the coronavirus.

Background: The online petition initiated by the Chinese state-run media Global Times for a WHO investigation on Fort Detrick’s leaking of COVID-19 was found to be fabricated. According to a report released by a New York-based digital consulting firm, over half the total amount of signatures, at least 13.3 million, were counterfeit.

The Foreign Correspondents’ Club of China said in a statement that the reporting condition for journalists who covered the Beijing Olympics failed to reach international standards, saying that “government interference occurred regularly during the Games.” It also highlighted the online trolling and abuse of reporters who were covering the event.

Background: Foreign journalists in China are facing “unprecedented hurdles” due to Beijing’s efforts to “block and discredit independent reporting,” the FCCC stated in its annual report. It indicated that the increased threats of lawsuits, intimidations and online attacks, along with growing nationalism and xenophobia, are making it increasingly difficult for journalists to do their jobs.

Concerns about participants’ data security linger despite the end of the Beijing Winter Olympics, what International Olympic Committee President Thomas Bach described as a “truly exceptional” Games. Although there has been no sign of “intrusion activity,” cybersecurity experts warned that the data compromises were usually detached “weeks or months after they occur.” They advised athletes coming back from China to change their passwords and make sure no unknown devices have access to their accounts.

Background: Earlier this month, the FBI advised U.S. athletes, including those competing in the Paralympics, to bring a temporary mobile phone to counter possible cyberattacks. On the same day, FBI Director Christopher Wray said that the Chinese government was “more brazen, more damaging” than ever before because of its technology theft and hacking program.

WeChat, China’s biggest messaging platform developed by Tencent, has been added to the “Notorious Markets List” by the U.S. Trade Representative for alleged involvement in “trademark counterfeiting or copyright piracy.” China-based online applications such as Baidu Wangpan, Pinduoduo, and Taobao are also on the list. The move was described by Ambassador Katherine Tai as a countermeasure to protect “critical U.S. innovation and creativity.”

Background: The U.S. Department of Justice charged a China-based telecommunications company with stealing technology from Illinois-based Motorola Solutions Inc., according to the indictment unsealed earlier this month.

The Swedish gold medal winner of Beijing Olympics Nils van der Poel gave his medal to the daughter of a Chinese-born Swedish publisher who is serving a 10-year prison sentence in China because of books that were critical of Beijing. He wanted to use this action to denounce China’s crackdown on free speech and abuse of ethnic minorities. It was likely the most audacious protest by an Olympics athlete.